Good cat food Only the best for our fluffy friends!

What does good cat food need?

In this article you can expect the following contents:

Cat food through the ages
What do cats need for their daily requirements?
It depends on the production method
Conclusion
Cat food is available in wet and dry form, from cheap to expensive and in a wide variety of flavours. It is fundamentally important, however, that the cat eats the food and is supplied with all the important nutrients at the same time, and that the quality of the cat food is right. This sounds relatively simple, but what does it entail in detail? It is also easy to lose track of everything when there is a large selection of cat food. We help you to understand what is important when it comes to good cat food and what ingredients should be included.

Cat food through the ages

Cats have lived alongside humans for thousands of years, well before they were domesticated. There were advantages for both sides: They hunted rodents such as mice, which feasted on people’s food, and for the cats, there was always food to be found near people. Besides mice, which provided the best nutrition, there was also leftover human food. That is why cats are still kept on farms, for example.
In city dwellings, the cat’s diet has shifted from mice or other ‘free-range food’ to cat food served in a dish. Humans can thus easily feed their pet and know that it is well taken care of. The first industrially produced cat food was launched by the company Spratt’s way back in 1876 already. The production of cat food is now a huge market that offers pet owners a wide selection. 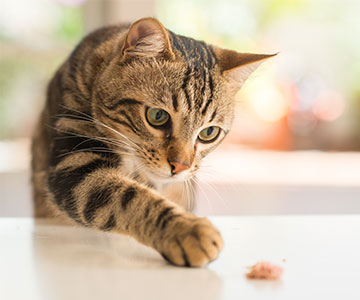 Cat food through the ages

What do cats need for their daily requirements?

Cats are carnivores and their body, including the gastrointestinal tract, is designed for this. They have a short intestine that can optimally digest the meat and the carbohydrates, fats and proteins it contains. In view of this fact, the first answer to the question ‘What does good cat food need?’ is provided: Meat! Because good food must also always be species-appropriate food! This means the cat is provided with the nutrients it needs for its daily requirements and it can best process at the same time. High-quality cat food should thus contain at least 80 percent or more meat. In nature, for example, a mouse would be their next lunch. It consists mainly of meat and also has a small proportion of vegetable components digested in its stomach that the cat would also partially eat. 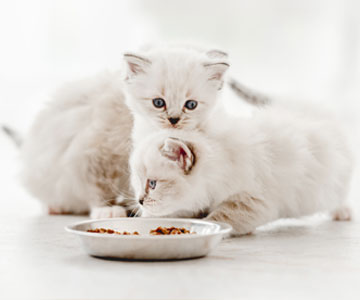 What do cats need for their daily requirements?

It is not only the proportion of meat in the food that is important, but also the quality of the meat. Average industrial cat food partly consists of only a small proportion of meat that is also of inferior quality. Meat – especially high-quality meat – is expensive to buy. Manufacturers of industrial cat food therefore like to use cheap by-products such as slaughterhouse waste, production waste from the food industry or inferior-quality meat. As an alternative to fresh meat in high-quality cat food, meat-and-bone meal or meat meal is also often used as a meat component in cat food. In Germany, it is also legally permissible to add old industrial or catering fat, artificial enzymes and additives and to make the food artificially delicious for cats by using flavour, colour and odour enhancers. Unfortunately, savings are being made at the wrong end here, because even if the cat eats the food, it is at the expense of our animal’s health. 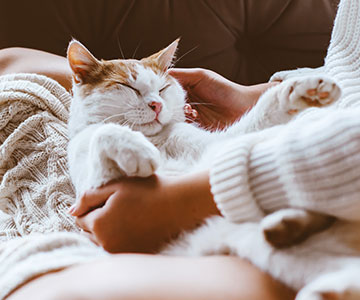 We focus on high-quality food for the sake of our cats’ health
The manufacturer must list the ingredients for each cat food. Here you should pay attention not only to the ingredients themselves but also to the order of the ingredients. Ingredients are listed in descending order of quantity and thus quickly show which main ingredient the food is based on.
It is not only the ingredients contained in the food that are important, but also those which should be avoided:
Sugar is primarily used in cheap industrial food to make it look better to humans. It is mixed into the food so that the meat does not turn grey during cooking and thus looks tastier in the bowl.
Additives in cat food do not improve quality but do the opposite: their purpose is to conceal poor quality. Attractants (i.e. palatability enhancers) are used here. Synthetic additives are used to improve the smell, taste and appearance (e.g. colour). Because if the cat food is made from cheap ingredients such as low-quality meat (meal) and lots of grain, the cats would probably not even touch it. It may also contain preservatives and glutamate. Glutamate cannot only artificially improve the taste, but it is also suspected of triggering an artificial feeling of hunger in the brain to further enhance the natural appetite. In addition to ‘tricking’ the senses such as taste, appearance and smell that cats use to choose a species-appropriate food for themselves, additives can also trigger allergies.
Another no-go is a high proportion of (gluten-containing) grains such as wheat or oats. This ingredient is very popular because in comparison to meat it is a cheap ingredient to buy, meaning it is added to food to increase profit margins.
Another popular ingredient – since it is very cheap – is water. It literally waters down the food when it is used. It is also a cheap ingredient that makes the food go further. In this case, you should pay attention to the manufacturers’ recommended quantities because your cat needs a lot more food when the food contains ingredients to make it go further such as wheat and water. High-quality cat food goes a lot further and your cat will need much smaller amounts. That’s why inexpensive industrial food sometimes seems cheaper when you look at the unit price on the shelf, but if you multiply it by the quantity, high-quality food is worth it based solely on the value you get for your money.
On top of all this, there’s also the health aspect to consider, since ingredients such as wheat and sugar are not part of the cat’s natural diet and can harm the cat and its organs, especially the digestive system, in the long run.
The use of meat meal or meat-and-bone meal also suggests that the cat food is of inferior quality. This is because the animal proteins in meat meal or meat-and-bone meal are lower in value than in fresh meat. The reason for this is that animal meal is a waste product of the meat industry, which has already been strongly heated several times before being processed into cat food. Compared to fresh meat, meat meal or meat-and-bone meal, as well as vegetable protein sources, have lower protein digestibility and biological value, and the same applies to the nutrient content. Cat food should thus only be prepared from fresh meat.

It depends on the production method

It depends on the production method

What good are the best ingredients or the highest meat content if the production method cooks away any natural vitamins, trace elements and amino acids and these then have to be added back artificially. This unfortunately is what happens with most cat foods. This is because the ingredients are pressed together with water under high pressure and at high temperatures to form a malleable ‘meat mixture’. Small pieces are then formed from this mixture and put through a dryer again before being packaged and sold as conventional dry cat food. Cats like this type of dry food and eat it from their dish on a daily basis, but veterinarians testify that this production process’ low level quality can harm the cat’s health in the medium to long term.
In contrast, we at PLATINUM use a Freshmeatdryer. Fresh meat is used in this process to prepare nutritious dry food which preserves the fresh meat’s natural micronutrients and amino acids. The Freshmeatdryer crisps the fresh meat along with all other important ingredients at a low temperature and with circulating air. The slow and even drying process preserves the natural taste of the meat while maintaining the right nutritional composition for cat health. MeatCrisp is therefore super tasty for your cat and doesn’t need any enticement. 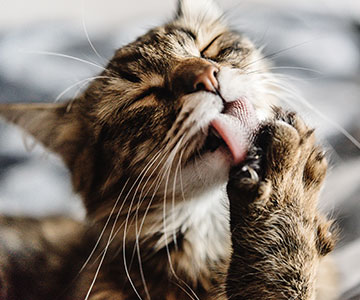 To ensure that the cat food doesn’t only taste good to your cat, but that it is also easy for your cat to digest and provides it with everything it needs to stay happy and healthy every day, compare the following points when selecting a cat food: 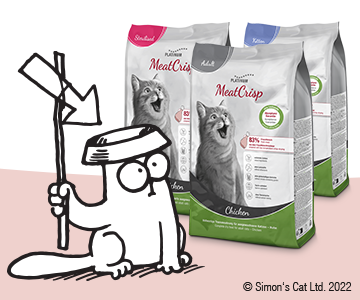 Discover PLATINUM MeatCrisp – the nutritious dry food for your cat! The advantages speak for themselves:
And we are sure your cat will love it. So sure that we offer you a 100-day money-back guarantee on all our products. No matter the reason, even if your pet doesn’t accept it or if you are not satisfied with our PLATINUM products.

More articles on the subject "Nutrition" 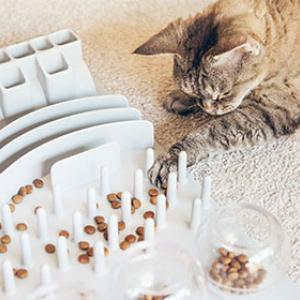 Activity Feeding is a type of activity in which the cat playfully acquires your cat food. Cats can live out their hunting and play instincts. But there are many other reasons and advantages for activity feeding in cats. 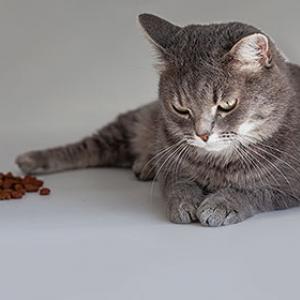 My cat has stopped eating

There can be many causes why a cat does not eat. Some of the causes are harmless, but refusing food in cats should not be taken lightly. 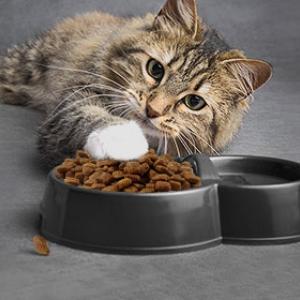 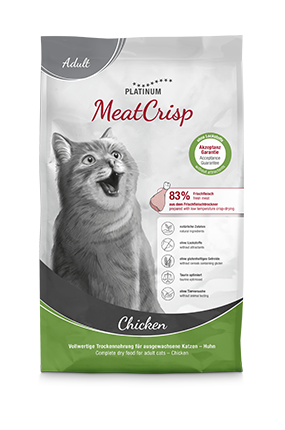 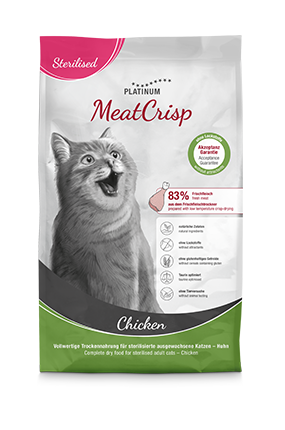 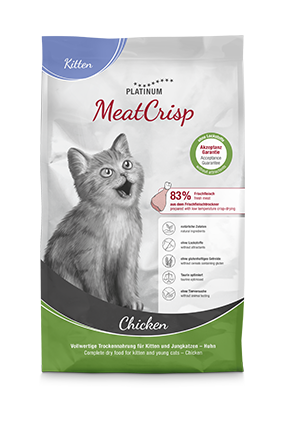 Not only do we have tasty dog food and cat food, but also cookies. However, these are not intended for your furry friend, but ensure an optimal shopping experience and the full functionality of our website.